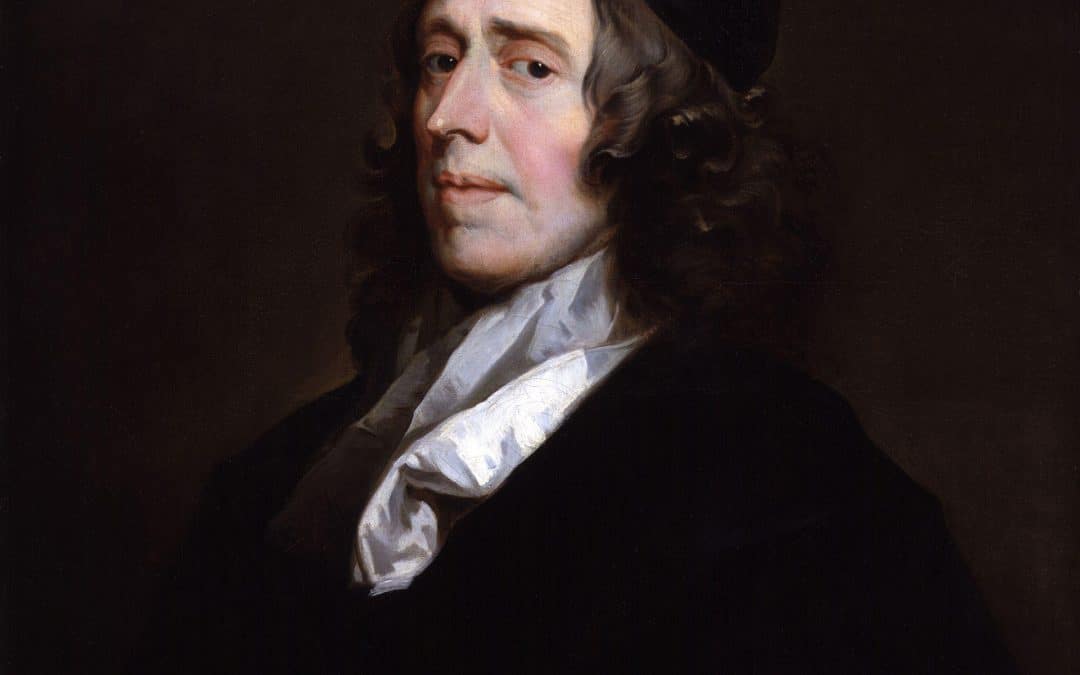 PURITANISM WAS A TIME OF DEEP AND PROFOUND Biblical thinking. John Owen (1616-83), a contemporary of Bunyan and Cromwell, is considered by most the greatest Puritan divine. In fact, many consider him England’s greatest theological thinker period. In the opinion of C.H. Spurgeon, he was “perhaps, the most profound divine who ever lived.”[i] If Puritanism was the high-water of biblical theology, and Owen its greatest and most original thinker, his life is worth consideration. Today, 300 years after his death, his works are still in print. Who was John Owen and why is he important to today’s Protestant minister?

John Owen was born to a Puritan pastor in 1616. His immense intellect asserted itself at an early age. A child prodigy, his parents enrolled him at Oxford [WF1]at age 12 from which he was awarded his B.A. at age 16 and his M.A. at age 19. He was a man of iron-willed discipline. Possessing great worldly ambition, but lacking the knowledge of salvation, during his student days he allowed himself only four hours of sleep each night hoping by his labors to secure favor and position with men.

In his mid-twenties, God began to work on his conscience. Doubting his conversion he went to hear Dr. Edmund Calumny, a well-known preacher in his day. To John’s disappointment, an unknown pastor filled Calumny’s pulpit that day. His discouraged friends wanted to leave but Owen was too exhausted, so he stayed. The preacher’s text was Matt. 8:26, “Why are you so fearful, O ye of little faith?” As Owen listened the Holy Spirit worked powerfully. He emerged a new man.

At this time Oxford was a divided community. Bishop Laud, of Star-chamber fame, had just been appointed Chancellor of the University. He was high-church Anglican. He favored State control of the national church and what the Puritan’s called “popery,” an emphasis upon outward worship such as vestments, incense, bells, the sign of the cross, and prayer books. The Puritan’s favored simplicity─adding nothing to worship not explicitly mentioned in scripture.

Owen sided with the Puritans and immediately fell out of favor with Laud and his party. He left Oxford with his second B.A. (in Divinity) unfinished. About this time the church at the village of Fordham, and later Cog[WF2]geshall, called him to be their pastor. God blessed his preaching. He regularly preached to Sunday crowds of 2,000─and immense congregation by 17th century standards.

About this time he married Mary Rooke. Little is known about their union except that together they birthed eleven children. Ten died in infancy─imagine the pain and anguish! The eleventh survived to adulthood, married unhappily, returned home, and shortly after died of consumption. Like his Master, Owen was a man of sorrows and acquainted with grief.

During Owen’s thirties, the English Civil war raged between a Puritan-dominated Parliament and King Charles I. John Bunyan served as a foot-soldier in Parliament’s army, and the genius of Oliver Cromwell asserted itself on the battlefield.

In 1648, when Owen was thirty two, one of Parliament’s generals, Fairfax, moved his headquarters to Coggeshall where Owen lived and preached. Fairfax attended Owen’s church, and they became fast friends. From this time Parliament increasingly invited him to preach to their gathered assemblies. Most were Protestants, and they loved good scriptural preaching.

This led to one of the great events of his life. In Jan 1649, the day after the beheading of Charles I, Parliament asked him to preach. It was a thankless job. Tensions were high. Owen was under severe pressure to side with Parliament or the friends of the King… He did neither.

His sermon was published, and he used this as an occasion to ask England and its rulers to consider religious toleration. We take religious liberty for granted, but in Owen’s day dissenters were often executed. Owen argued against this practice and for toleration of Christian denominations. He was generations ahead of his time[WF3].

April 1649 Owen preaches to Parliament a second time. His words deeply impact Cromwell, who is trying to govern the nation through Parliament after the execution of Charles [WF4]I.

God gave Owen favor with Parliament and Cromwell. In 1649 Cromwell took Owen with him to Ireland to preach to his troops. He did the same in 1650 when he went Scotland.

During the Civil Wars, King Charles had established his army headquarters at Oxford. The army put the university to severe use, and it was now in shambles. In 1650 Parliament appointed Owen Dean of Christ Church, one of Oxford’s most prestigious colleges, and from 1652-57 he served as Vice-Chancellor (President) of the University. He felt immensely inadequate[WF5].

During these years Cromwell often called Owen to London for consultation on issues of church and State. Given these responsibilities, his productivity staggers the faint of heart. For, in addition to all the above he published De Iustitia, a work on the justice of God; Theologouma Pantodapa, the substance of his Oxford lectures, Biblical Theology, and three well-known works still popular today, Mortification, Temptation, and Communion With God.

Describing his preaching at this time one of his enemies wrote, “His personage was proper and comely and he had a very graceful behaviour in the pulpit, an eloquent elocution, a winning and insinuating deportment and could by the persuasion of his oratory…move and win the affection of his admiring auditory almost as he pleased.”[iii]

In the summer of 1658 he convened and led the famous “Savoy Conference,” to craft the first statement of faith by independent Congregationalists.

Then in Sept 1658, Cromwell died. The political condition destabilized quickly. In 1660 the Army called Charles II, the son of the beheaded Charles I, to resume the monarchy of his beheaded father. It seemed as if all the principles that the Puritans had labored and fought for were undone.

In the meantime, Owen retired to the village of Stadhamption [WF6]and planted a church in his home. It was 1659. He was 43.

Charles and Parliament began to persecute the Puritans.  It was at this time that John Bunyan’s imprisonment began. Owen suffered great loss of financial security and loss of prestige. He moved to London to pastor a small independent church there. He continued in this position for the next twenty years.

Slowly the spiritual climate began to improve. In 1671 Charles II issued the “declaration of Indulgence” granting tolerance to Roman Catholics and Independents” like Owen. About this time Owen befriended Bunyan. In fact, when Bunyan couldn’t find a publisher, Owen talked his own publisher into printing the first edition of The Pilgrim’s Progress.[WF7]

During these years Owen labored unceasingly. In addition to other works he wrote his monumental multi-volume commentary on the Epistle to the Hebrews, a Discourse on The Holy Spirit, his work Apostasy (1676), Justification by Faith (1677), The Person of Christ(1678), and The Grace and Duty of Being Spiritually-minded.

In his sixtieth year, 1676, his beloved wife, Mary, died. By seventeenth-century standards, Owen was now a very old man, and his health began to fail. He suffered bouts of gout and stomach problems. But his tremendous work ethic remained unabated. In the year prior to his death, he wrote his great work, Meditations and Discourses on The Glory of Christ. His printer was editing it as Owen lay dying.

His last letter written in August 1683 to an old friend illuminates his passion for Christ. “I am going to him whom my soul hath loved, or rather hath loved me with an everlasting love; which is the whole ground of all my consolation…I am leaving the ship of the church in a great storm, but while the great Pilot is in it the loss of a poor under-rower will be inconsiderable.”[iv] ” He died a few days later at the age of 67.

Biblical theology was his first love and passion. He would have never considered himself a philosopher or an academic, but first and foremost an expositor of God’s word. Although a Calvinist by conviction, as were most of his peers, his thought was not dry but alive with the Holy Spirit’s power. He maintained an intense interest in spiritual experience, harnessed by the great truths of scripture, and released through the power of God upon biblical preaching. Like most great Christian thinkers he focused on major themes─The Trinity, Justification by Faith, and the Glory of Christ. He considered himself first and foremost a pastor of souls, not an academic.

Like most great minds, he pursued knowledge for the right reasons. For Owen furthering secret communion with God was the reason to study theology. Can we say the same? He writes, “When the heart is cast indeed into the mould of the doctrine that the mind embraceth; when the evidence and necessity of the truth abides in…our hearts; when we have communion with God in the doctrine we contend for─then shall we be garrisoned by the grace of God . . .”[v]

Second, he learned how to rejoice in great trials. Despite the death of eleven children, his suffering and persecution under Charles II, intense responsibilities and great pressures, he cultivated a cheerful, joyful, grateful attitude.

Third, he had a servant’s heart which showed up in his tremendous work ethic. He gave himself one hundred percent to the cause of Christ and His kingdom.

Fourth, his biblical studies led him to deep levels of humility. He knew himself in the light of Christ. “The work of faith,” he wrote, “is to fill the soul with such thoughts as these: ‘I am nothing; a poor worm at God’s disposal; lost, if not found by Christ; — have done, can do, nothing on the account whereof I should be accepted with God.’”[vi]  That was how this great intellect saw himself before God.

What lessons can we learn from Owen’s life? First, his life demonstrates what can happen when God joins a large intellect with a profound work Puethic. His work, in twenty-eight volumes, speaks to the value of these virtues. It is deep, meaty, and of eternal value. Most of the Christian literature published this year will be out of print in ten years, but men will probably be still reading Owen two hundred years from now.

Second, from Owen’s life we see the value of integrating scholarship with pastoral work and responsibility. Like Luther, Calvin, Edwards, and Bunyan Owen saw himself first and foremost as a pastor. He laid great emphasis upon preaching. As was true of Calvin and Luther, his pastoral contact with people provided the balance and perspective that so greatly empowered his theological writing. He kept himself from the distractions of administration and counseling to invest himself in preaching and writing, work that most powerfully changed lives.

Third, Owen’s life reminds us that God’s discipline produces beautiful fruit in those trained by it. No one wants Owen’s trials and sufferings, but should they come, let us bear them cheerfully and with faith.

Owen left us with little personal information. After his death, his diaries and most of his letters were lost. You can get to know the man best by reading his sermons, and his great work composed while dying, The Glory of Christ. You can buy his works on C.D. for about $30 through Ages Software, or for several hundred dollars, the twenty-eight volumes published by Banner of Truth are available. A helpful primer is John Owen, The Man And His Theology, edited by R.W. Oliver, Evangelical Press.