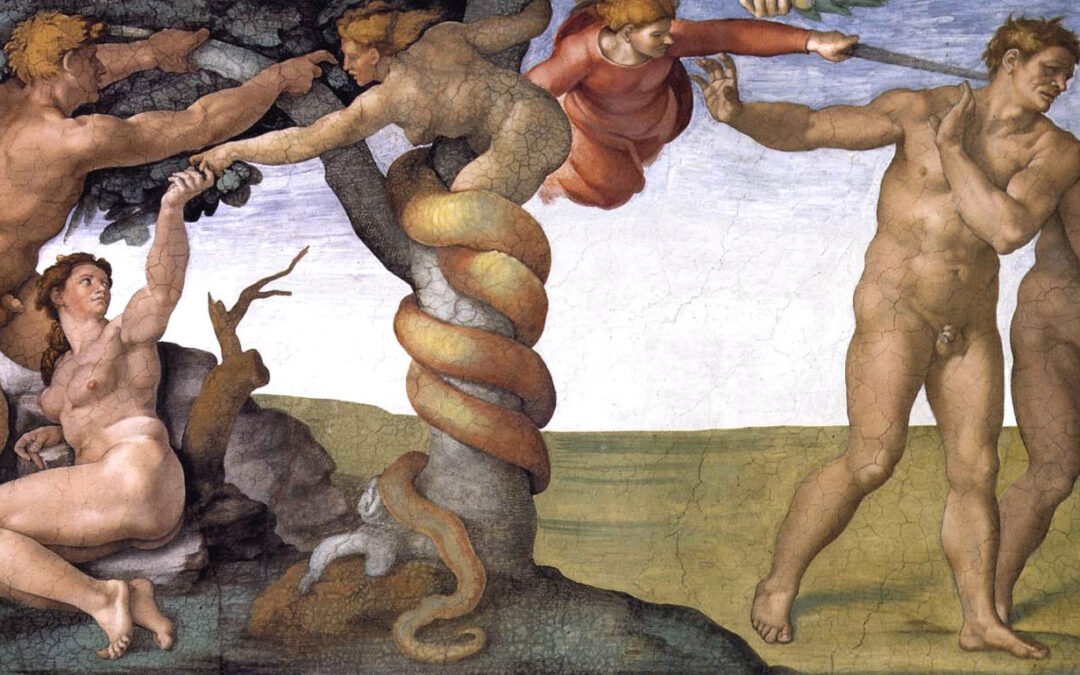 GENESIS CHAPTER THREE records the story of the Serpents temptation of Adam and Eve. It was the first instance of spiritual warfare, and by watching we learn how the Evil One operates. His methods are timeless. Nothing has changed. He still employs the same tactics.

“Now the serpent was more crafty than any other beast of the field that the Lord God had made. He said to the woman, “Did God actually say, ‘You shall not eat of any tree in the garden’?” And the woman said to the serpent, “We may eat of the fruit of the trees in the garden, but God said, ‘You shall not eat of the fruit of the tree that is in the midst of the garden, neither shall you touch it, lest you die.’ ” But the serpent said to the woman, “You will not surely die. For God knows that when you eat of it your eyes will be opened, and you will be like God, knowing good and evil.” So when the woman saw that the tree was good for food, and that it was a delight to the eyes, and that the tree was to be desired to make one wise, she took of its fruit and ate, and she also gave some to her husband who was with her, and he ate. Then the eyes of both were opened, and they knew that they were naked. And they sewed fig leaves together and made themselves loincloths.” (Genesis 3:1–7).

From this text we can distill seven techniques the Serpent still regularly uses. There are others, but these are the most important.

1st “He said to the Woman.” The Devil attacks at the weakest link. In this case, he avoids Adam and attacks the woman. I know. It is incredibly non PC to suggest that the female is weaker than the male, but the Bible is not PC. It describes reality. “Showing honor to the woman as the weaker vessel” (1 Peter 3:7). “For Adam was formed first, then Eve; and Adam was not deceived, but the woman was deceived and became a transgressor” (1 Timothy 2:13–14).

4th “For God knows that when you eat of it your eyes will be opened, and you will be like God, knowing good and evil.” He impugns the goodness of God. To Eve he implies that God is not good, that He is holding her back because he doesn’t want a competitor. How often has a thought like this come to you? Is God really good? Can I really trust God? Is he really on my side? Does he really have my best in mind? Maybe he is just a cosmic killjoy. After what you have done, or failed to do, do you really think God loves you, forgives you, and is really on your side?

5th “You will be like God knowing good and evil.” He motivates pride. If you eat the forbidden fruit you will be “like God.” Here is the root of all evil, pretensions to personal deity. Its fruits are looking down on others, selfishness, racism, self-centeredness, proud condescending thoughts and actions.

7th. Last, his temptations always turns the order of Creation on its head. God created Adam to rule over his wife and then the animals. But notice the effect of this temptation. Eve submits to the Serpent, an animal, then Adam submits to Eve. The serpent is now ruling Eve, who now rules Adam. This is the exact opposite of God’s plan. “But I want you to understand that the head of every man is Christ, the head of a wife is her husband, and the head of Christ is God.” (1 Corinthians 11:3).

The bad news is God’s response to Eve and then Adam’s failure. He cursed them with spiritual and physical death. Then he judged creation with the principle of death and decay.

Thankfully, this is not the end of the story. In Matthew chapter four the Serpent tempts the Second Adam. But Jesus did what the first Adam failed to do. He attacked the Devil with God’s Word. “Man shall not live on bread alone.” “You shall not put the Lord your God to the test.” “You shall worship the Lord you God and him only shall you serve.” How about you and me? Is this what we are doing? Faithful belief in and use of God’s Word overcomes all of these demonic strategies.