History Is His Story! 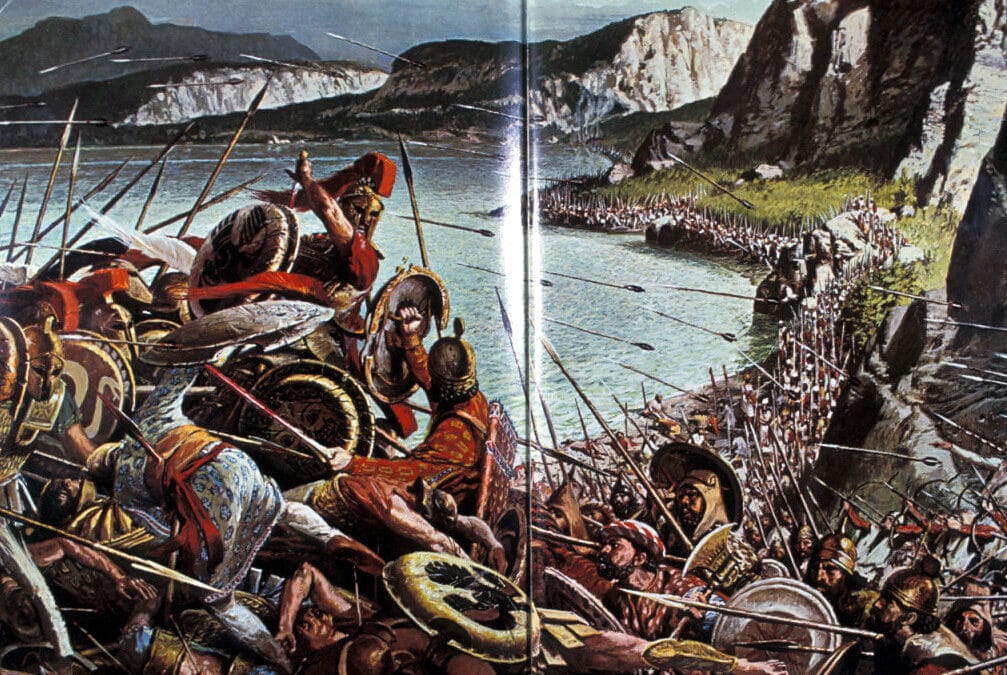 EVERYONE LOVES AN UNDERDOG, one who triumphs in the face of overwhelming odds. That is one reason the story of David and Goliath is so popular. It is also the reason the Battle of Thermopylae is often retold.

In 480 BC Xerxes I, king of Persia and husband of Queen Esther, invaded Greece with an army of 150,000 men. Persia was the world’s solitary world power. In today’s language, Persia was a superpower. She had no rival. Stretching from NW India to the western tip of what is now Turkey, her population numbered approximately fifty million. Her armies were immense, and King Xerxes’ wealth was phenomenal. Persia’s army and navy were the world’s largest. She had no serious rivals.

The country targeted by Xerxes, Greece, was the opposite. A collection of city-states with no central government, the population of Greece was only about 200,000. Her two dominant cities were Athens and Sparta. Athens was a cultured metropolis of wealth, philosophy, art, and sophistication. This city’s economy thrived on trade, and she built a robust navy to protect the sea lanes upon which that trade depended.

As the crow flies, Sparta was about 70 miles to the southwest of Athens. It was a no-nonsense culture of war, military discipline, asceticism, and conquest. Athens’ strength was its navy, but Sparta lived and died by its famously disciplined army—an army that ruthlessly dispatched its foes. Each male child born to a Spartan family was enrolled in the military academy at age eight. There he grew up with the Spartan boys and men learning the art of war.

Because of their differences, Athens and Sparta were often engaged in open hostility. The threat of the vast Persian multitude, however, coming down from the North, motivated them to put aside their differences and unite against a common foe.

Persia’s Xerxes was insanely ambitious. He intended to quickly conquer insignificant Greece and then proceed west into what is now Europe. His army traveled west through modern Turkey crossed the Bosporus, and then began the slow descent through the Greek peninsula. The objective was first Athens, then Sparta. However, to reach Athens the Persians had to travel through a pass known to the locals as Thermopylae. It was about fifty yards wide. On the Persian right was a cliff, and behind that unpassable mountains for many miles. On the left were the waters of the Euboean Gulf. It was here that a brave and resolute band of 300 Spartans and 700 assorted Greek helpers took their stand. Geography was their asset. The narrow confines of this pass made it impossible for more than a few Persian soldiers to engage them at once.

First, Xerxes sent 10,000 Medes against the little Spartan band, but they were repulsed. Watching from a distance, the king was furious. Then he sent an elite corps of crack soldiers known as The Immortals. But the little band of Spartans repulsed them also.

The second day continued as the first. Then, late in the afternoon, for money, a local shepherd betrayed his Greek brothers. He showed the Persian army a goat path through and around the mountains to the West. It allowed the Persians to get behind the Spartan infantry. Attacked from both front and rear, the heroic Spartans died where they stood.

Although the 300 Spartans failed to repulse the Persians, their stand at Thermopylae bought important time. It allowed the Athenians to evacuate their city. The Persian army arrived to find Athens empty. Then a few months later the Athenian navy destroyed the Persian navy at the battle of Salamis. Defeated, Xerxes and his mighty Persian army returned the way they came. Greece survived in what turned out to be one of history’s least expected victories.

This story illustrates God’s sovereignty over the details of history. Greek Culture has substantially influenced the development of the Western World. Had the Spartan stand at Thermopylae not occurred, the Persians would have overrun Greece. Greek culture would have been mostly lost to history, and the entire development of the West would have looked different. History is his story, and we are thankful that God sits above the circle of the earth directing it all for his glory.