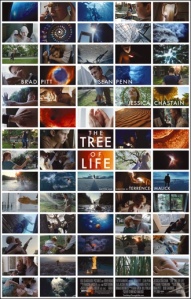 “Where were you when I laid the foundation of the earth? Tell me, if you have understanding…when the morning stars sang together and all the sons of God shouted for joy?” (Job 38:4,7) These bright words blazed into the darkness of the theater as the opening scene of the 2011 film The Tree of Life

starring Brad Pitt, Jessica Chastain, Sean Penn, and Hunter McCracken in an artistic exploration of the human condition. The rest of the film subtly brings to life director Terrence Malick’s parallel of the cosmic grandeur of creation with a very ordinary, dysfunctional suburban family in Texas in the late 1950’s. Malick makes a bold attempt to capture the reality of suffering and grief, the incomprehensible otherness of the Creator, and the frail yet beautiful faith in God that can live between the two.

Tree of Life is not a typical plot-driven movie. There is very little dialogue. The movie opens with the mother receiving notice that her 19-year-old son has died in the Vietnam War. The screen quietly eavesdrops on the grief of mother, father, and brother… unfolding into the whispered questions to God, “Why?” and “Who are we to you?” The film then segues into a slow sequence of swirling images and views of galaxies and planets as they form. A young earth’s volcanoes erupt, and recurrent images of the ocean’s waves show life emerging. Dinosaurs roam the landscape very realistically. An asteroid hits the earth. We are propelled forward in time to the suburbs, to the family as it used to be. It begins with the young groom and bride starting their home, and the birth of the three boys. The family prays before their meals, and before bed. They attend church. Many everyday events of a child’s life are shown in their truth and beauty through the incredible cinematography. We see the harshness of the father, the quiet love of the mother, and the rough camaraderie of the brothers. The eldest son begins to rebel under the heavy hand of his dad, and the rest of the film explores the emergence of his hate for his father and his own chaotic, adolescent desires. The end of the film provides a reconciliation of past and future, faith and unbelief, grief and peace, and father and son.

I would recommend watching the Tree of Life. Although it hints at evolution, and falls short of its goal to sum up all existence, this movie succeeds in ways few movies do. It explores human suffering while humbly implying God’s right to do as He wishes. While remaining mysterious about the nature of God, Malick is not leaving an agnostic message. His film ends with the singing of the Agnus Dei (Latin for the words of John the Baptist, “Behold the Lamb of God who takes away the sin of the world.”) The mother character prays, “Keep us. Guide us to the end of time.” A childlike voice answers, “Follow me.” Other Biblically veiled dialogue occurs when the oldest boy struggles with wrong desires, and says, “What I want to do, I can’t do. What I do, I hate.” (Romans 7:15) He also prays, “Always you were calling me.” The tree of life from the title is the big oak in the front yard on which the boys play. Yet the film title serves to point us to the true Tree of Life in the achingly beautiful City of God depicted in Revelation 22. Everything on Earth should make us hunger for heaven.

In the end, Malick paints a masterpiece of a story: suffering makes us feel life’s beauty more intensely, and look beyond ourselves, leading us on a quest to seek the One who made all life. As the mother says at the end of the movie, “The only way to be happy is to love.” Loving God through faith in the gospel is the key to solving the riddle of our existence…Brian Huseland