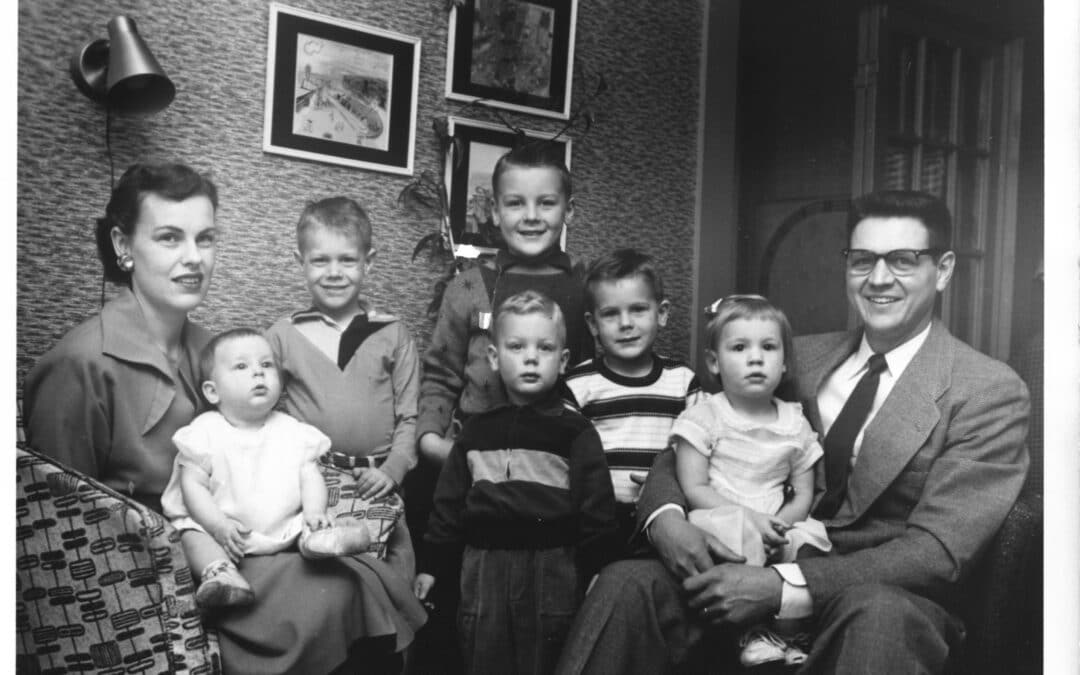 I WAS BORN IN 1948, the first child with eight more to follow. My first Christmas memory was 1955. It was a maturing moment in my youthful development, and one that I will never forget.

My father was a Civil Engineer working for the Army Corp of Engineers on Chief Joseph Dam on the Columbia River in central Washington. It was named after the great chief of the Nez Pierce tribe. We lived in Brewster, about five miles downstream in a 1500 square foot rental on First Street. Across the street was a bluff that plunged 100 feet to the river below. My brothers and I ran all over that bluff and down to the river, but I don’t ever remember my parents being anxious. They were the original free-range parents.

Although in 1955 I was only seven, my mother, a true servant if there ever was one, had already given birth to five additional siblings; Bruce, Bob, Tom, Katie, and baby sister, Josephine. Did I mention we were Catholic? That’s right, hey didn’t believe in birth control. But unlike so many today, my parents had fierce convictions by which they lived, even when costly, and that example did much to positively shape my future character.

It was the era of Roy Rogers, The Lone Ranger, the Mouseketeers (I was infatuated with Annette Funicello), and black and white TV westerns. Therefore, my brothers and I rode stick horses around the yard. occasionally pausing to have gunfights with our Fanner Fifty pistols.

Earlier that Fall, my parents bought a Basset Hound puppy. They named him Pierre. The bond was instant. I and my three brothers slept in a big double bed, and every night Pierre slept on the covers between us.

The winter of 55-56 was cold and snowy. Walking home from school I approached the house one December afternoon and was confronted by a large pool of blood in the driveway snow. I remember feeling a premonition that this had something to do with Pierre. I anxiously entered the house. My mother greeted me, her sensitive eyes moist with tears.

“Mom, what was that pool of blood all about?”

“Your father parked the car in the driveway. Because it was warm, Pierre crawled under it and went to sleep. Later your father backed out and accidentally ran over your puppy.”

It was my first experience with real heart-grief, of emotional loss and pain, the kind that comes to us unexpectedly in life. It was a necessary part of growing up, but I still remember it clearly.

Thankfully, it was only a few weeks until Christmas. The expectation of Santa, gifts, cookies, and tasty treats drowned my Pierre-sorrows in an ocean of hope. We had a modest tree in the living room. We weren’t rich. My father made about $250 a month ($2500 in today’s money). My mother possessed a bachelor’s degree, but like most 1950s moms, she didn’t contribute income to the family. She was a full-time housewife. But, she did explain Santa Clause to me. I then sat down and wrote Santa a request letter. (I don’t remember what I asked for).

With intense anticipation, my siblings and I went to bed on Christmas Eve. About midnight I was awakened by sounds from the front room. I cracked the bedroom door expecting to see Santa. But instead, to my shock and awe, I saw my father assembling an electric train set under the tree. The awful truth washed over me. My father was Santa Clause. I immediately woke my brothers and shared the “bad news.”

Children are resilient. They don’t need a perfect environment. In fact, some pain and disappointment are the necessary moral and spiritual vitamins that nourish children into productive, happy adults. Although my first Christmas memory involved disappointments, it was also a time of family love and security. I got over my sorrows and lived to enjoy many happy Christmases thereafter.