THE UPCOMING ELECTION is a first in American history. Both candidates are deplorable. The result is that many don’t know who to vote for, while others are just dropping out of the political process altogether.
Although neither Hillary or Trump are attractive alternatives, I believe Trump is the best alternative. Here is why.  The two candidates represent vastly different platforms. The contrasts between the Democratic and Republican platforms couldn’t be more black and white. It is the platform that I am voting for, not the candidate. Therefore, I am voting Republican. 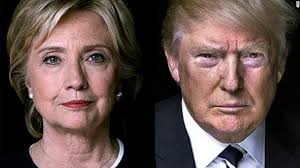 I can do this despite Trumps disgusting treatment of women. Why? I don’t expect too much from him or politics. I accept that the political system is fallen. It is run by sinners. Its head is the “Prince of This World.” We are not a Christian nation.
I am thankful for the freedoms that we have enjoyed. I am thankful for the prosperity that we have enjoyed. However, I expect very little from politics. Unless Jesus Christ is running for President the choice is always the lesser of two evils. Government cannot save. It will not save. Our hope is not in Civil Government.
Yes, a good political system can make life better. For 250 years we have enjoyed the best political system in history. It was good because our culture accepted biblical morality as its standard, but since the sixties that standard has slowly disappeared. Now it is almost completely gone. We cannot expect prosperity and freedom from a secular worldview. We can only expect oppression, abuse, and a diminishment of national wealth. That is where we are at. I have painfully accepted this.
We used to fear the tyranny of kings, but we have discovered that the tyranny of the majority is almost as bad. In both cases sinners are ruling. Democracy, like all human political systems,  has been tried and found wanting. This means that a better candidate will not fix America. The electorate, not the President, is the problem. We are an immoral, godless people. Only an outpouring of the Holy Spirit can fix our political disease. That should be our prayer. That should be our focal point.
I honor and respect the many Christian leaders who refuse to vote for Trump. In my view they are hopelessly idealistic about politics, our responsibility towards it,  and the way our government really work. A vote for anyone but Trump is a vote for the Democratic Platform. That will mean an acceleration of abortion, and possibly infanticide. It will mean increased socialism. It will mean the loss of our religious freedoms through Supreme Court activism. It will mean the increasing oppression of Christians and Christian institutions. It will mean an ever-burgeoning national debt, which will lead to the reduction of our military might, and possible world chaos.  It will mean more racial strife, and more inner city chaos. It will mean open borders. The list goes on and on.
We are at a great turning point. If Hillary wins she will most likely be in office for eight years. By that time America as we have known it will be flushed, and I don’t think it will be retrievable. That is why I will hold my nose and vote for Donald Trump. I am not a political idealist. I am a political realist.