Sheep In the Midst of Wolves 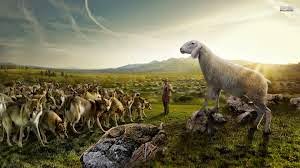 IN THE TENTH CHAPTER OF MATTHEW Jesus warned his disciples, “Behold I am sending you out as sheep in the midst of wolves, so be shrewd as serpents, and innocent as doves.” Recent events in the media have made us feel the truth of these words.
Although God is sovereign over persecution resistance to the church has often, but not always, been the case. For example Open Doors[1] estimates some 100 million Christians are persecuted globally each year. Islamic extremism is the prime culprit, accounting for most persecution in 40 of the 50 countries on the list.
But, persecution is not just for Christians under Islamic rule. It is increasingly the experience of Christians in North America. For example, here is how some of the liberal media responded to last week’s Charlie Hebdo assassinations in Paris.
“MSNBC compared…the fundamentalist Muslims who carried out the crime with …Jerry Falwell and Liberty University. Several American politicians and journalists made comments along the lines of “all religions have their fundamentalists responsible for violence” (and of course, remember this from Salon? ‘What’s the difference between Sarah Palin and Muslim fundamentalists? Libstick…”).[2]
The great irony in the response to the Charlie Hebdo attack on free speech last week was our blatant hypocrisy. The “Progressives” are seeking to muzzle free speech here, and no one seems to note the similarities with the Muslim radicals.
For example, in October the lesbian mayor of Houston subpoenaed all of the pastors in the city to turn over any sermon material that referenced homosexuality. Their crime? They opposed the newly passed “equal rights ordinance” which allowed any male to use any women’s public bathroom.
In addition, many have lost their jobs because they object to homosexual activity.
“ATLANTA — Mayor Kasim Reed announced Tuesday [Jan. 5, 2014] that he had fired the chief of the city’s Fire Rescue Department, Kelvin Cochran, after Mr. Cochran gave workers a religious book he wrote containing passages that condemns homosexuality. [The Fire Chief] is…a member of a church affiliated with the Southern Baptist Convention, which holds homosexuality to be sinful. Mr. Cochran’s book, “Who Told You That You Were Naked?” counts homosexual acts among a number of “vile, vulgar and inappropriate” activities that serve to “dishonor God,” according to excerpts obtained by the local gay news media and activists.”[3]
Here is the bottom line. In Dr. Mohler’s words a newly discovered “right” to erotic freedom is conquering, squelching, crushing, and smothering our constitutional right to freedom of speech, and freedom of religion. There is incredible hypocrisy at work.  The Muslim attempt to suppress the speech of the editors of Charlie Hebdo is unthinkable. But, stateside the suppression of free speech, if that free speech supports Christian sexual morality, is politically correct.
This kind of spiritual conflict is the point of today’s text. Jesus tells his disciples that he is sending them out as sheep in the midst of wolves. This text is very relevant to contemporary experience.
“16 “Behold, I am sending you out as sheep in the midst of wolves, so be wise as serpentsand innocent as doves.
“Sheep in the midst of wolves” is a graphic word-picture. This is not what we want to hear. We want Jesus to say, “I am sending you out as Lions in the midst of antelope.” But that is not what he says. He likens the church to “sheep,” and likens the world to “wolves.”
Think about it. What is more harmless than a sheep? They have no fangs, no claws, no horns, i.e. no way to defend themselves. They can’t disguise themselves. They can’t even run away.
By contrast, what is more vicious, predatory, swift, and skilled at devastation than a wolf? He is fast, he is lean, he has long fangs, and he is blood thirsty.
In other words, this conflict is no contest. In this war the sheep are the losers. Sheep only have one protection—the Shepherd. His job is  to guard and protect them from the wolf.
That is why  Jesus tells his disciples (his sheep) to be “wise as serpents and innocent as doves.”
Does that describe the church today?
[1]Founded by Brother Andrew in the 1960s to evangelize behind the Iron Curtain
[2] http://thecripplegate.com/the-ineptitude-of-moral-equivalence/
[3]Richard Faucett, New York Times, “Atlanta Ousts Fire Chief Who Has Anti Gay View,” Jan 6, 2015