Three Reasons Why Only Christians Should Use the Phrase “The Right Side of History!”[1] 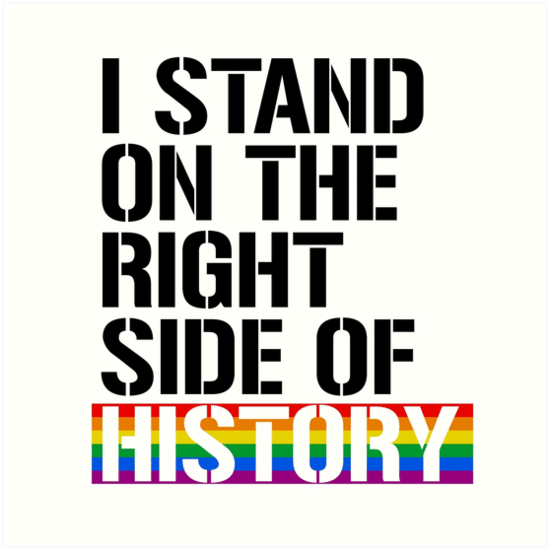 THE EXPRESSION “ON THE RIGHT SIDE OF HISTORY” is an important tool used by progressive social warriors to silence the Christian right.  Never mind that it rests on significant religious assumptions. After all, no one can prove that history is inexorably going somewhere. Huge segments of the world population reject this idea. They believe that history is circular. Since it can’t be proved that history is going somewhere, it is a religious assumption. The progressives hold it by faith, and by doing so they are acting contrary to their secular presuppositions.

Nevertheless, we are grateful that the Progressives agree with Christians that history is going somewhere, and that it’s end will be just and morally beneficial. But they have borrowed this assumption from the Christian worldview, and now they are ironically using it to pound us into submission. But Believers have solid grounds to push back.

Whenever a person says “I am on the right side of history” they are presuming that their understanding of right and wrong is the same as Whoever or Whatever is in control of history. Since most on the left are atheists, agnostics, or religious liberals their use of this phrase is a fundamental hypocrisy. If there is no personal God, history is going nowhere, or at best it is moving randomly. And even if it is going somewhere, on the basis of the left’s confessed worldview, they should have no way of knowing where it is going.

In effect the speaker is saying, “If you’re smart, you will get on my side before it’s too late, before the inevitability of history tramples you under its hobnailed boots.” The Left assumes “that history marches with them,” writes Jay Nordlinger. “Get out of the way or be crushed.”[2] The phrase is used to bully those who doubt the rightness or wrongness of gay marriage, abortion, firearm ownership, LGBT rights, taxing the rich, ending the death penalty, advancing socialism, legalizing pot, or a variety of other left-wing causes.

The Need For Humility

However, because most that have used this expression in the past have been dead wrong, it would behoove the Left to use it with humility. For example, The French Revolution at the end of the 18th century was utterly convinced that it was on the “right side of history.” It dissolved the French Monarchy, and devastated Europe with the Napoleonic Wars, but the progressive changes that the “revolution” assumed were on the “right side of history” were dead on arrival within a few decades.

Oxford historian Andrew Roberts observes that the phrase, “the right side of history” is “profoundly Marxian.”[3] The followers of Karl Marx insisted that a Communist Worker’s Paradise was history’s inevitable terminus. Alas, as I write there are only a handful of Communists countries remaining, and communism will soon be shown to have been, not on the right side of history, but on the dust bin of history.  Jesse Jackson, while running for president in 1984 said that the Sandinistas in Nicaragua were on the “right side of history.” The Sandinistas are now a soon-to-be-forgotten footnote to history, and it has only been a few decades.

First, only Christians have a spiritual right to this phrase. The God of the Bible is the God of history. History is “his story.” He created time and space “ex nihilo.” Because only he is in control of history, only he can predict the future. That is one reason God fortells the future through the prophets—to prove to us that he is in control of the future—that it is actually going somewhere, and that only he knows when and where it will arrive.

Most importantly, in great detail, centuries before it happened, through his prophets, God predicted the life, death, and resurrection of the Messiah. How could God do this? God could do this because he alone is in total control of history. His ability to predict the future certifies this truth. (See Isaiah 44:7-8, 45:21, 46:9-10 for God’s claim to be Lord of History). Since he alone knows the beginning from the end, only those aligned with his will and purposes have a spiritual right to say that they are on the “right side of history.”

Second, only Christians have a historical right to this phrase. Think about it. Since the time of Christ, the Christian religion has dominated world history. God also predicted that this would be the case.

Jesus likened his kingdom to a mustard seed, the smallest of seeds, which would slowly mature throughout history into a dominant tree in whom the birds (symbolizing the nations) would eventually make their nests (Matthew 13:31-32). And, in fact, this is exactly what has happened. From where did the industrial revolution, the scientific revolution, and political freedom arise? Western Christian culture. From what culture have the dominant nations come in the last millennium? Not from Muslim culture. Not from Hindu, Buddhist, or Shinto culture. Not from the Enlightenment Culture. Why not? Because only Christ is the Lord of History. Because Jesus died and rose from the dead, God has given him “all authority in heaven and on earth,” and he exercises that authority on behalf of cultures sympathetic to, and influenced by, his gospel.

That is why only Christians have an historical right to the phrase, “The right side of history.”

Last, only Christians have a moral duty to use this phrase. There is a “right side of history,” and it has a terminus—a Day of Final Judgment. On that Day those not reconciled to God by faith in the work of his Son Jesus Christ will “enter the caves of the rocks and the holes of the ground, from before the terror of the Lord, and from the splendor of his majesty, when he rises to terrify the earth” (Isaiah 2:19). This is not a pleasant thought, but that does not for a second mitigate its truthfulness.

A day of final reckoning quickly approaches. Will you, your loved ones, and your friends be on “the right side of history?” Wise men and women tremble at the thought of being on the wrong side.

I sometimes fear that the culture warriors are more motivated than we, and this should not be the case. Why? Because eternity hangs in the balance. “For we must all appear before the judgment seat of Christ,” warned the great apostle, “so that each one may receive what is due for what he has done in the body, whether good or evil” (2 Corinthians 5:10).

So, in the end, the progressives are right. There is a right side of history. But they need to first humble themselves and admit that their worldview gives them no right to use this phrase. In fact, they stole it from the church. Do we understand this? Are we confident that only Christians are on the right side of history?

The only people on the “right side of history” are those who have humbled themselves, confessed their sin, and believed the gospel. Gospel grace has taught them “to live self-controlled, upright, and godly lives in the present age.” We alone hope in the true culmination of history, “the appearing of the glory of our great God and Savior Jesus Christ” (Titus 2:12-13). On that Day God will create New Heavens and a New Earth. There those on the “right side of history” will join him with “joy inexpressible and full of glory” (1 Peter 1:8).

Only Christians have a spiritual right, an historical right, and the moral duty to say they are on “the right side of history.” Let’s use this phrase with solemnity, humility, and perseverance.