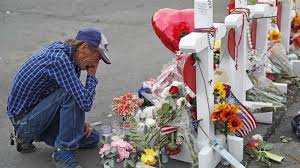 MASS SHOOTINGS ARE AN UNSETTLING REALITY OF MODERN LIFE. Take the first weekend in August. Two separate shooters terrorized El Paso, Texas, and Dayton, Ohio. Thirty-two died, and fifty-two were wounded, exacerbating the national debate about the causes of these senseless slaughters.

Mass shootings are a relatively new phenomenon. When I grew up in the fifties and sixties, they were almost unknown. My first memory was in the Summer of 1966. A lone gunman killed 16 and wounded 31at the University of Texas. That began a trend which has only accelerated since.  Between 1982 and 2011 one occurred every 200 days. Since 2011 one has occurred every 64 days.[i]

What is the cause? It can’t be toxic masculinity or guns. Masculinity and guns have always been around, but mass shootings have not. So, what has changed? What is the root cause? What lessons can we learn, and more importantly, what can Christians do about it? Here are four lessons that Believers can glean from the recent history of mass shootings.

Men and women are different.

Could anything be more politically incorrect? Nevertheless, an FBI study concluded that 94% of mass murderers were men. “In a separate FBI study published in April 2018, analyzing 50 active shooter incidents between 2016 and 2017, all shooters were male.”

Think about it! The world tells us that men and women are the same. Stand up in a crowded room and verbally celebrate the physical, emotional, and mental differences between the sexes and watch what happens. It won’t be pleasant. But, if men and women were the same, 50% of the shooters would be female. So why is this activity almost exclusively perpetrate by men?

The answer is simple and obvious. God created the sexes differently. “Male and female he created them” (Genesis 1:27). By God’s design, the average adult male has ten times more testosterone than the average female, and testosterone motivates aggression. However, God gives men the gift of aggression to propel service, not death and destruction.

Second, the mass shootings teach us that fathers matter. Fatherlessness is in the background of almost every mass shooter. OfCNN’s list of the 27 deadliest mass shootings in U.S. history, only one grew up with his biological father.[ii]Fatherlessness tends to morph male aggression from its proper role of service into destructive behaviors.

Fatherhood is essential to the family. It reflects eternal realities. God is a Father.[1] He has a son. He is the head of a family. Wanting to replicate himself, God created and appointed fathers to lead families. No culture can survive its collapse.

But in America, fatherhood is collapsing. In 1960 only 5% of births were to single mothers, and about 8% of young men grew up without their father,[iii] And mass shootings were almost unknown. Today 40% of births are to single mothers, and the percent is rising.[iv] Because some of the fathers eventually marry the mother, about 35% of our young men now grow up without their biological father. And, as the percent of fatherless children has increased, so have mass shootings.

Fathers teach their sons how to channel their God-given aggression into marriage, fatherhood, and service to the broader community.

Third, the mass shootings confirm the truth of God’s words to Adam. “It is not good for man to be alone” (Genesis 2:18). Almost every mass murderer is single or divorced. Marriage, like fatherhood, channels male aggression into productive outlets. Marriage redirects a man’s God-given aggression into serving and caring for women and children.

Although Genesis 2 presumes that marriage is the normal adult state, singleness is increasingly becoming the norm. The percent of married American adults is rapidly declining. In 1960 over 85 % of American adults were married. In 2011 it fell below 50% for the first time.

Rootless, single men, lacking male role models, unattached to a spouse, children, or extended family, hooked on pornography, angry and resentful toward a culture that considers their masculinity “toxic,’ is the tragic side effect of the breakdown of gender distinctions, fatherhood, and marriage.

The sexual revolution is the problem

The sexual revolution confuses sexual identity, castigates fatherhood, and demotivates marriage. It assassinates biblical sexual morality. As the prohibitions against pre-marital sex have disappeared, cohabitation has replaced marriage. “Why buy the cow,” our young men ask, “when you can get the milk for free?” Their logic is impeccable.

Before the sexual revolution, in the sixties, Western culture celebrated the differences between the sexes, honored marriage, and esteemed chastity and fatherhood. Few boys grew up apart from their fathers, and although guns were available, there were few mass shootings. By their mid to late twenties, most men were caring for wives and children.[vi]

How about feminism? Although we are thankful that it has enhanced political and economic equality for women, it has also turned women into competitors, and who wants to marry a competitor? Feminism also encourages women to prioritize career over marriage and children. The result is predictable. Age at first marriage has gone up, the percent of married adults has gone down, and because sex hasn’t decreased, millions of women are raising their sons solo.

What Can Christians Do?

First, evangelicals should be clear about the issues. Guns are not the problem. The problem is sinful human hearts motivating and designing sinful social movements.

Also, for those who fall into sexual sin, this teaching needs to be followed by church discipline. Obviously, it should be applied with gospel-centered grace, extending kindness and forbearance to those who fall but are repentant.

Third, we must pray for revival. Ultimately, the solution to gender confusion, fatherlessness, and the collapse of marriage is a massive cultural heart change. But changing hearts is beyond our pay grade. It is divine work. This means we need revival. We need a massive outpouring of God’s Spirit upon our churches and broader culture.

It also means that God alone is the solution to mass shootings. Let us seek him with humility through repentance and faith.

[iii] It is 8% rather than 5% because some of the fathers were absent because of death.