Idolatry Is the Mother of Addiction

Only God can provide ultimate satisfaction, ultimate meaning, and ultimate happiness.  When we ascribe “ultimacy” to anything created (a relationship, asset, experience, accomplishment) we deify it. If we fail to repent, God may give us up to the idol. Then, convinced that the material blessing can do what only God can do. we become addicted.God wants us addicted to himself, not one of his legitimate earthly pleasures.

This is the case with sex. When practiced within marriage, as a way to serve our spouse, it can be a great source of joy. It is fulfilling the purpose for which God created it. But when pursued as an end in itself, its failure to satisfy will cause us to squeeze it for greater and greater thrills.  Sexual addiction is the result. Sex as God intended it has now morphed into sado-masochism, wife swapping, etc.. Because sex can never satisfy, no sexual pleasure is ever good enough. This is why pornography is so addicting. It might start with a Playboy centerfold, progress to total nudity, then heterosexual sex, homosexual sex, rape scenes, then bestiality, etc. etc. The joy and satisfaction that God intended for sex in marriage is gone. We are in bondage. We are miserable. We are addicted and we don’t know the way out.

This is also true of material things. Food, clothing, shelter, transportation, and cell phones are God’s good gifts, but when we expect something material to give ultimate security, or meaning, nothing is ever “enough.” “He who loves money will not be satisfied with money, nor he who loves wealth with his income; this also is vanity” (Ecclesiastes 5:10). 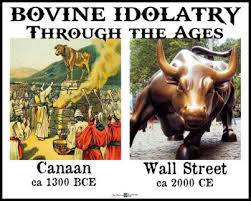 The same principle applies to fame and success. By age 30 Tom Brady had already won three super-bowls. In a Sixty Minutes interview he transparently asked, “Why do I have three Super Bowl rings and still think there’s something greater out there for me?” We admire Brady for his transparent honesty. However, the answer is simple. Only God can satisfy! Three Super Bowl rings will only satisfy one who understands that only God can provide ultimate satisfaction.

If you are addicted to sex, money, fame or whatever, there will be a deep, gnawing restlessness. The way to freedom is simple. Repent and look to the proper Source of all happiness and fulfillment. The restlessness will die. Heart-contentment will increasingly reign. You will discover the truth of Augustine’s famous statement. “Our hearts are restless, Lord, until they rest in you.”

Here is the bottom line. Sex, fame, food, and worldly glory only satisfy when we don’t expect them to. Therefore, terminate the pain of addiction with repentance. Addict yourself to God. You won’t be disappointed.