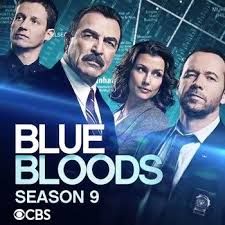 JUDY AND I HAVE BEEN WATCHING back episodes of a weekly drama, Blue Bloods, on Netflix. With almost ten seasons available it has been enduringly popular, and new shows are being added each week. It is the story of a New York City law enforcement family. Frank Reagan (Tom Selleck) plays the New York City Police Commissioner. It’s in his blood. It’s a family legacy—his father was the Commissioner before him.

And it’s not just Frank, but law enforcement is in the entire family. His oldest son, Danny (Donnie Wahlberg), is married to Linda (Amy Carlson) and has two sons. He is a detective. The youngest son, Jamie, despite being a single Harvard law grad, follows in the family tradition and is a beat cop like his grandfather, father, and brother. Sister, Erin, (Bridget Moynahan) divorced and with one daughter, is a district attorney for the city. Another son, Joe, died in the line of duty before the series began.

Although not perfect, this series is about as moral as a contemporary drama is going to get. It does portray today’s sexual ethics and morals. (Sexual promiscuity is just assumed). However, Judy and I have made it to the seventh season and there has been no nudity or sexually explicit scenes.

The Reagan family are faithful Catholics, and their religion produces especially strong familial bonds. This is one of this series strengths. The extended family meets for Sunday dinner on every show. They always begin with grace, and although they sometimes fail to live distinctively Christian lives, the producers are not embarrassed to show them as Christian theists with high views of family, marriage, and the importance of law and order.

The scriptwriters also use the Sunday dinners as a forum to discuss a host of moral situations that arise in each episode. Amazingly, these conversations are deep and provocative.

Is this show perfect? No! But if you are looking for wholesome family entertainment, this is about as good as it gets in 2019.