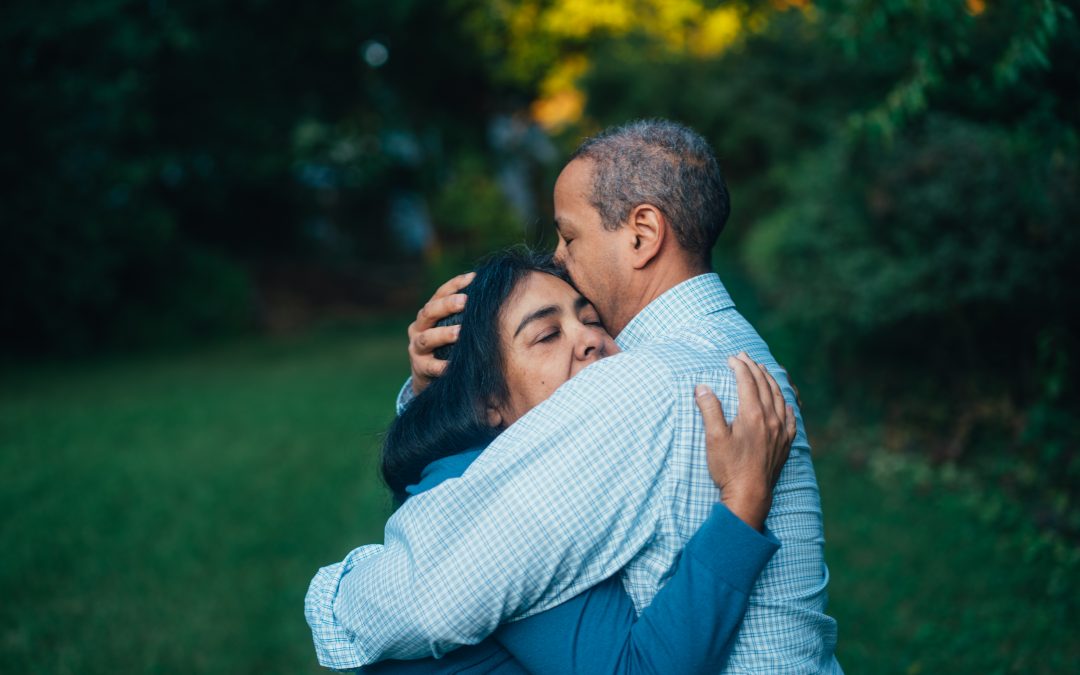 WHEN I WAS ABOUT TEN, I met my aunt Margaret for the first time. She was in a wheelchair in the middle of the front room, drooling uncontrollably, unaware of my presence, incontinent, and unable to take care of herself. Despite this, my uncle Gale cared for her tenderly. They were high school sweethearts, but now, she was dying of brain cancer after only fifteen years together. My uncle didn’t abandon her. He didn’t get a mistress. No, he had publicly vowed “in sickness and in health till death do us part,” and he was faithful to that vow. A few years later, she died. This is the biblical idea of marriage. Servanthood! Faithfulness! Self-denial!

But Times have changed. Our cultural expectations for marriage have gone through a radical transformation, and those changes affect the broader culture and the church.

Conservative commentator, Jonah Goldberg, describes the transformation this way. “The old attitude was that one must work for the marriage. The new attitude is that the marriage had better work for me.”[1]

My uncle “worked for his marriage.” He was willing to forgo short-term happiness for the sake of his spouse, his children, and the glory of God. He believed that keeping his marriage vows would enhance his joy in this life and in the world to come.

But those who expect marriage to “work for me” assume that “God just wants me to be happy.” Their focus is on me and my immediate needs. They will most likely bail when any significant, protracted marital trouble comes.

Here is how esteemed University of Virginia sociologist F. Bradford Wilcox sums up the our new marital expectations.

Prior to the late 1960s, Americans were more likely to look at marriage and family through the prisms of duty, obligation, and sacrifice…But the psychological revolution’s focus on individual fulfillment and personal growth changed all that. Increasingly, marriage was seen as a vehicle for a self-orinted ethic of romance, intimacy, and fulfillment. In this new psychological approach to married life, one’s primary obligation was not to one’s family but to oneself, hence, marital success was defined not by successfully meeting obligations to one’s spouse and children but by a strong sense of subjective happiness in marriage—usually to be found in and through anbd intense, emotional relatioship with one’s sopouse. The 1970s marked the period when, for man American, a more institutional model of marriage gave way to the “soul-mate morde” of marriag.”[2]

Professor Wilcox’s “soul-mate model” is a fruit of expressive individualism. The assumptions behind this model are moral solvent dissolving the covenant bond of marriage. At its center is a potent, marriage-wrecking lie. God just wants me to be happy! Couples have used this lie to justify abortion, divorce, adultery, abandonment, and all kinds of selfishness.

The problem with this lie is that it is partially true. God does want us to be happy, but immediate happiness is never God’s primary goal. God wants couples to pursue a greater long-term marital happiness through the self-denial that expresses Christian holiness! God expects us to deny self—to defer immediate marital gratification, in order to experience greater long-term happiness. There are times when this takes great faith.

“The lie” is a deeply rooted cultural assumption. The problem with assumptions is that they are subconscious. We seldom consciously think about them. They seep into us through TV, movies, literature, media, music, and our educational system.

One way they rise to the surface and become visible is through consumer advertising. Add agencies get paid to identify the assumptions that motivate us. Here are some examples, and they are all toxic to marriage.

Applied to marriage, these cultural assumptions are lethal.

The Mind of Christ

The assumptions expressed by the mind of Christ are completely different. There are rules, and only those who obey them are “right.” Do we deserve a “break today?” Are we really “worth it?” And above all should we give into sinful passion and “just do it?” No! The logic of the cross is decisive. It is a game changer. We deserve crucifixion.

Instead, marital happiness comes through self-denial, humility, unselfishness, and the crucifixion of the “just do it” mentality. Ultimately, the wise Christian couple pursuing a happy, God-glorifying union will model their marriage on “Christ and him crucified.” Jesus acquired joy through self-denial, and so will we.

Here are three scriptures that shed light on the assumptions that express the “mind of Christ”.  After predicting his death and resurrection, Jesus turned to his disciples and said—

If anyone would come after me, let him deny himself and take up his cross and follow me. For whoever would save his life will lose it, but whoever loses his life for my sake will find it.

“Take up your cross? Are you kidding?” The cross was an instrument of torture, death, suffering, and pain. But Jesus urges us to save our lives by doing just that—taking up your cross. This means that we save our marriages by denying ourselves—doing what we don’t want to. We make our spouse’s happiness more important than our own. We apply the principle of the cross. We do this with the conviction that happiness deferred is much greater than happiness immediately gratified. This takes us to the second assumption behind the mind of Christ—servanthood.

Happy, fruitful marriages never think in terms of rights. They think from the mind of Christ. Jesus denied his rights to give us rights. Husbands and wives that “save their lives” do the same.

Our third scripture assumes that happy, fruitful marriages always look up to their mates.

Do nothing from selfishness or vain conceit, but in humility consider others more significant [or important] than yourself .

The closest “other” in your life is your spouse—the person that sleeps with you, eats with you, goes to church with you, and helps you raise your children. Applying this principle gets really practical.

One day my wife and I entered Walmart, and Judy began to disinfect the shopping cart handle. She is anxious about germs in a way that I am not, so I immediately began to look down on her. I can’t believe she is doing that, I thought. How foolish. If she were only like me, she wouldn’t sweat these silly details.

God assigns the husband the job of leading by example. These texts apply to him first. Because I am a husband I repented and tried to put on the mind of Christ.

Jesus reminds us that out of the heart the mouth speaks. Here is how spouses talk to each other that have adopted the lie.

“Do you really expect me to forgive?” (But forgiveness is not optional for Believers. Matthew 18:22 commands us to forgive 70X7).

“How could anyone ever thank God for a spouse like you? God knows I deserve better.” (As we have already noted, we actually deserve the cross, and on this basis Colossians 2:7 commands us to overflow with thanksgiving no matter our circumstances).

“If we just had a better sexual relationship, we wouldn’t have any problem.” (The truth is the exact opposite. Great sex doesn’t make great marriages. Great servant-marriages make great sex).

What about the fruit of “the lie?” As “the lie” proliferates in North America the fruits are painfully obvious. The institution of marriage is dying. Self-denial is the glue that makes the marital covenant work. Without a willingness to deny self people are not willing to marry, or they don’t stay married. In 1970 just under 90% of adults were married. Today, for the first time in U.S. history, it is under 50% and falling. “Marriage isn’t changing,” notes sociologist Mark Regnerus. “It’s receding. In an era of increasing options, technology, gender equality, “cheap” sex, and secularization, fewer people—including fewer practicing Christians—actually want what marriage is. That’s the bottom line.”[4]

Obviously, collapsing marriage also means collapsing fertility. We are not producing enough children to replace ourselves. Were it not for immigration, the population in North America would be shrinking. Thankfully, fertility rates in the Evangelical Church are better than the national average.

What can we do to reject “the lie?” Start with the assumption that you don’t deserve to be happy. As we have already noted, the cross shows each of us what we deserve—crucifixion, and that is the bottom line. Therefore, no matter how bad your marital circumstances, you are always getting better than you deserve! Those who believe this are continually thankful for their spouse, for their marital problems, for their marital joys, and for God’s kindness.

We can also reject “the lie” by assuming that holy people are happy people, and marriage is one of God’s primary tools to maximize personal holiness. “To be holy as he is holy,” notes Bruce Milne, “is the prescription for true and endless happiness. To be holy is to be happy…there is no joy like that of holiness.”[5]

I have found it helpful to think of marriage as a spiritual gymnasium in which I strengthen personal holiness. Marriage toughens the muscle of forgiveness. It strengthens the willingness to love an enemy, and it enhances the ability to humble myself and receive criticism. Marriage also teaches the crucial words, “I’m sorry. Would you please forgive me?”

In the marital gym, I also strengthen the crucial muscle of perseverance. Most marriages face a moment when they would like to call it quits. But this is almost always a mistake. Focus On The Family did a study of couples who persevered through the desire to divorce, only to find that five years later, most of those who persevered now described themselves as happy. Persevering when the going gets tough requires self-denial, but it solves many lesser problems.

In summary, Ambrose Bierce, a 19th-century literary figure, not known for being a Christian, nevertheless summed up marriage with these insightful words.  “Marriage is a community consisting of a master, a mistress, and two slaves, making in all, one person.” My insightful wife sums up the mind of Christ in marriage this way, “Every fruitful, happy marriage begins with two funerals!”

This is how mind of Christ thinks. It thinks like my uncle, Gale. Reject the lie that immediate happiness is the goal. Yes, God does want us to be happy, but happiness only comes to those who deny themselves and take up their cross daily. They serve unselfishly, consider their spouse more important than themself, persevere through marital troubles, practice forgiveness, and grow in humility. These are the marriages that maximize long-term happiness, and God gets the glory.

[1] Goldberg, Jonah. Suicide of the West: How the Rebirth of Tribalism, Populism, Nationalism, and Identity Politics is Destroying American Democracy (p. 267). The Crown Publishing Group. Kindle Edition. Italics mine. [3] It is important to note that this does not justify tolerating physical abuse